How to Fix Rounded Shoulders With Exercise Rounded shoulders is where your shoulders are rotated forward, pulling the shoulder girdle forward, which shortens your chest muscles and stretches your upper back and trapezius muscles. It is often a result of upper cross syndrome, which includes a forward head posture and kyphosis. Upper cross syndrome is thought to throw the upper body out of alignment so that the center of gravity shifts forward, causing the head to stick forward and the shoulders to round forward. This triad combo also causes tightness in the neck muscles, coupled with weakness of the deep neck flexor and scapular muscles.

In most cases, this type of posture does not cause shoulder pain or back pain, based on research on kyphosis in younger and older adults. But if you want to look taller and less stooped, there are ways to “fix” your rounded shoulders.

Just as your daily habits may have gradually caused your posture to hunch forward, it’ll take time to bring it back as much as possible. There’s no guarantee that it’ll work, but it’s worth trying.

But first, let’s take a look at what causes rounded shoulders based on science.

Rounded shoulders are caused by the forward tilting of the shoulder blades. This is usually coupled with tight pectoral muscles and can gradually increase tightness in the soft tissues at the front of the shoulder joint.

Other causes of rounded shoulders that are not disease- or injury-related may include:

Rounded shoulders may likely cause shoulder pain due to change in alignment of the scapula during overhead activities.

This includes athletes (e.g. volleyball, tennis) and workers in jobs that require overhead movements (e.g. electricians, construction workers) that can lead to ongoing irritation of the structures in the shoulder capsule.

In the long run, this may cause various shoulder issues, including partial rotator cuff tears and acromioclavicular joint disease.

But the shoulder girdle posture isn’t the only cause. Researchers in New Delhi, India, described the change in posture from other body parts, like your hips and lower spine, can cause a domino effect to your upper body posture.

So it’s not surprising to someone with rounded shoulders with an anterior pelvic tilt and lordosis.

How to “fix” rounded shoulders with exercise

Exercise is one of the less expensive and more accessible treatments of rounded shoulders. You can do this almost anywhere—at the gym or at home.

The idea behind exercises is to provide the body with movement in the . direction opposite to the one it has assumed for long periods of time

It follows the framework of stretching the tight muscles and strengthening the weak ones. While the scientific evidence to support this idea is weak, there’s a gathering body of evidence to suggest that exercise can help reduce pain. You may also do this on floor like the scapular T exercise but with your arms raise diagnoally instead of laterally. 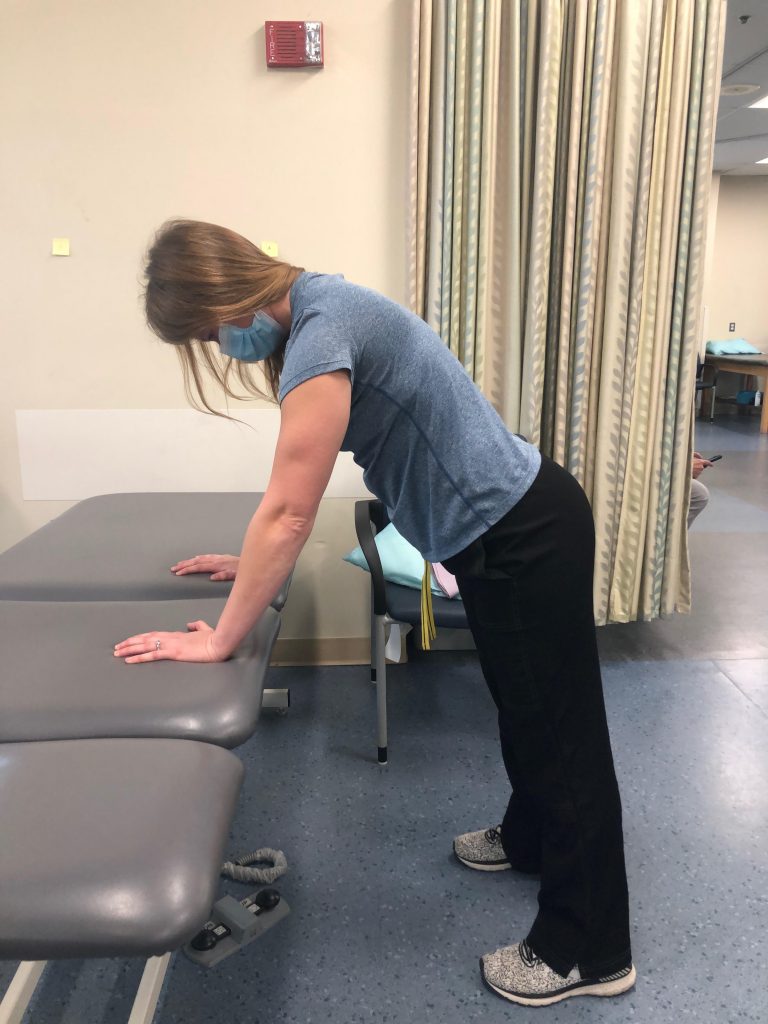 This exercise is about pushing your hands into the counter and moving your body away from the counter, unlike a regular push up where you go towards the surface.

Exercise is often used together with other treatments, such as bracing, manual therapy, and more invasive procedures, such as surgery in extreme cases where rounded shoulders may restrict movement and cause pain.

Scapular bracing devices are helpful to correct rounded shoulders, but it should be used with exercises before and after bracing.

The type of treatments and exercise you do would depend on various factors, such as the degree of kyphosis, the progression of deformity, the flexibility of your spine, symptoms, and age.

But overall, the goal of exercise is to improve or maintain the quality of life.

Caveat: no one really knows if it’s the exercise itself that helps or the change from static posturing. It’s also possible that people who exercise regularly end up being more aware of their posture and move better and more frequently, and that may be the secret ingredient!

Besides strengthening the back and shoulders, stretching could be used to temporarily alleviate the tightness in your chest and anterior shoulders. The type of stretching you do depends on your preference.

But does stretching work?

Combined with strengthening exercises, stretching has been shown to reduce protracted shoulders and forward head among teenagers, but for older adults, no one knows for sure.

Can rounded shoulders cause back pain and shoulder pain?

While it’s a common belief that rounded shoulders and having a hunching posture can cause back pain and shoulder pain, research finds that some people with these postures don’t have any pain.

Some studies noted the correlation between kyphosis, osteoporosis, and chronic upper and mid-back pain in older women. Similarly, this study found increased thoracic kyphosis has been associated with upper back pain in postmenopausal women.

However, a study of 610 older women found that those with higher degrees of kyphosis “had no greater risk of back pain or disability” than those with less kyphotic posture.

In the bigger picture, a 2016 systematic review found that kyphosis with rounded shoulders “may not be an important contributor to the development of shoulder pain.”

Because pain itself is caused by many factors, including psychological and social, we shouldn’t blame any single thing (like posture) that is the “root” of pain. We may miss out other factors that may contribute to pain.

But even if the hunching posture doesn’t cause pain, it can limit how much you can move as spinal extension contributes to the endrange overhead shoulder movement. In other words, the extension can help you reach higher or throw a baseball with more force.

Keep in mind that not all postures can or should be “fixed,” and having a certain type of posture doesn’t mean that you will get pain or won’t get it.

But there are cases where having rounded shoulders can be problematic.  Some researchers concluded that in older adults, increased kyphosis can be a factor in increased fall risk and fractures.

Other symptoms of rounded shoulders and kyphosis include:

This downward spiral can be easily prevented by exercise therapy targeted at improved strength and endurance of postural muscles.

While we tend to look at the posture based on structural differences (e.g. tightness, weakness, contracture), having rounded shoulders may also be a reflection of underlying psychological changes, such as depression.

A Brazilian study found that people with clinical depression has rounded shoulders, pelvic tilt, forward head posture, and a hunching posture during episodes of depression

And so, the effects of psychological health cannot be over-emphasized. Postural changes can be a clue to these psychological issues, and early detection and treatment can make significant changes to someone’s quality of life.

This underscores the importance of movement and activity rather than fixation on an idea of perfect posture.

There is growing evidence to suggest that there is no strong cause and effect relationship between posture and pain.

Pain is a complex phenomenon which is now widely accepted to respond best to a biopsychosocial response—shifting from the highly biological models and explanations to a more psychosocial approach.

While rounded shoulders have been demonized, it’is illogical to believe that a military-like posture would be the answer to most pain and disability.

So while understanding why, how, and when rounded shoulders may become a problem, knowing that the issue could be resolved by movement, varying your posture, and strength exercise.

We all slouch every now and then, the body is designed so that we can when we need to. As long as you don’t remain slouched all the time, it’s okay. So don’t stress much about that text neck, but make sure that’s not all you’re doing throughout the day! My name is Tanvi Maharaja. I work as a Physical Therapist in an outpatient hospital setting in the Greater Boston Region. I have a Doctor of Physical Therapy degree, and I am a Board-Certified Specialist in Orthopedic Physical Therapy. I am also an eclectic practitioner of manual therapy, being a Certified Manual Therapist through NAIOMT, with a special interest in the spine. I love to write, cook, swim, and go on long walks to nowhere with my family.

What Is a Deep Tissue Massage? A Modern Narrative How to Get Rid of Muscle Soreness Massage Therapist Resume: 6 Tips That Make You Stand Out Revisiting the Biopsychosocial Model of Pain for Massage Therapists