The gate control theory of pain shed much light in our understanding of pain, which opened doors to new research since the late 1960s. Having withstood over 50 years of tests and rigors of science, the gate-control theory helped Melzack and his colleagues develop the neuromatrix theory of pain, which is based on their work with patients experiencing phantom-limb pain.

But the changes of pain science wasn’t always a linear process. There were a lot of debate, experiments, and speculations that ping-ponged different theories and ideas. A new and “less wrong” may arise, but it won’t be accepted the majority — not while in the dinosaur theory’s shadow.

While many manual therapists who are familiar with pain science have heard about Descartes’ introduction to the specificity theory and gate control theory, not many may be familiar with the process and the people who bridged both theories.

This is the least complicated of all theories of pain, yet science has already moved on from this theory since the early 20th century. The tenet of this theory states “each somatosensory modality has a specific receptor and associated sensory fiber that is sensitive to one specific stimulus.” (1)

In other words, there is a receptor that responds to a specific stimulus, such as temperature, touch, scent, or pain. For example, there is a fiber for the smell of an orange, one for a mango, one for a pineapple, etc.

This theory is likely stemmed from observations and treatments of injuries and battle wounds throughout human history and from some animal experiments. Medical treatments for pain include surgery to repair damaged peripheral nerves with sutures and amputation. (5)

Thus, it is intuitive for many physicians and early scientists to focus on the site of the injury and the peripherals rather than the central nervous system or the brain, which gave the rise and prevailing acceptance of the specificity theory.

Descartes described pain as a perception that exists in the brain and makes a distinction between nociception and pain (the term “nociception” and the discovery of nociceptors wasn’t in until the late 19th century). His model was based on Galen’s perception model, postulating that a gate existed between the brain and tubular structures of nerves, which was opened by a sensory cue.

This opening allowed pneuma, or “animal spirits,” to flow through the nerve fibers to move muscles and provide information to the (passive) brain.(1, 2)

The famous illustration in Descartes’ “Treatise of Man” that shows a young man moving his foot away from the fire with an illustration of how sensation works wasn’t a depiction of pain, but it sparked ideas for future physiologists and physicians who refined the specificity theory. 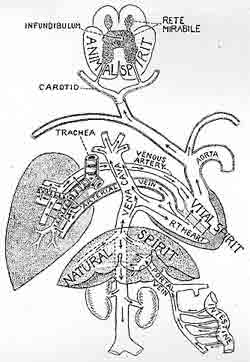 Galen’s circulatory system. This animal spirit, as it was known, was responsible for the body’s ability to sense and move. Piggy-backing on Galen’s teachings, Descartes believed that there are many nerve fibers that elicit sensations when they are “tugged.” In the Treatise of Man, he wrote, “…these animal spirits enter into [the] ventricles of the brain, they pass from there into the pores in the brain substance, and from these pores into the nerves. And according as they enter…they have the power to alter the shape of the muscles into which these nerves are inserted, and by this means make the members move….” (4)

According to Moayedi and Davis, Descartes believed that the rate of firing and pattern provide enough information to the brain about the stimulus intensity and quality. For example, when there is enough tug on the fiber and it breaks, pain can be felt. If the same magnitude of the tug on the fiber is applied and it didn’t break, then a “tickling” sensation is felt. (1)

While most of Descartes’ ideas on pain was refuted as better methods, technology, and reasoning developed in the next two hundred years, such as the concept of pneuma, the specificity theory still dominated most medical thinking well into the 19th century. ​

In the early 19th century, Charles Bell, who was a Scottish physician and philosopher, expanded Descartes’ idea based on anatomical evidence of the brain, which isn’t a “common sensorium” — a single mass — as Descartes had suggested. Instead, it is a mixed-bag structure, having different types of neurons, such as motor, sensory, and “vital” that connect to the “mind” rather than the brain.

He also was among the first to differentiate motor and sensory components of the cranial and spinal nerves. (1, 5) Bell still demarcated the difference between perception of stimulus and perceptual experience. His findings were later confirmed by French physician François Magendie, who found that motor and sensory nerves have separate paths to and from the spinal cord. (1)

​While much the pain treatment is heavily focused on the peripheral nervous system and other tissues during the 19th century, there was hardly consideration for the central nervous system— never mind the psychosocial aspect of pain that science currently accepts. psychology and sociology were in their infancy in the last quarter of the 19th century.

Even so, there were some case reports and experimental studies that gradually paved a new path to understanding pain and to move away from the specificity theory of pain.

Several observations and experiments made in the mid-19th century questioned the existing specificity theory, whether pain is truly a linear pathway from the peripheral nerves to the brain with a huge number of specific fibers dedicated to specific senses.

One experiment of the spinal column by Schiff and Woroschiloff found two sensory pathways: the anterolateral pathway (pain and temperature) of the spinothalamic tract and the posterior bundles of the posterior column – medial lemniscus pathway (fine touch), which further confirmed Bell’s and Magendie’s findings. They found, however, that the latter did not cross at the level of the spinal cord. (1)

Around the same time, a case report in London from a well-known English physician, William Richard Gowers, described a patient with a bullet wound to the gray matter of the spinal cord had lost his sense of pain and temperature but not touch, which reflected on the work of Schiff and Woroschiloff. (1)

While these studies and cases (among possibly many others that were unpublished or undocumented at the time) indicate that not all pain stems from the peripheral nervous system, it wasn’t until the 1890s when physicians Magnus Blix and Alfred Goldscheider published a paper on “sensory spots.” This refers to tiny areas on the skin that were specific to heat, cold, pain, pressure, and touch. They proposed that sensory information from the peripheral nerves converge to the dorsal horn of the spinal column. (1)

Based on the intensity theory, a single touch stimulation isn’t always enough to elicit pain. This idea was proposed by Aristotle that pain is excessive stimulation, and such stimulation and central summation are detriments of pain. (1)

Goldscheider and another German physician Bernard Naunyn conducted experiments on patients with syphilis who had degenerated dorsal column, where they performed “repeated tactile stimulation” just below touch perception. These patients felt pain after the stimulation was excited 60 to 600 times.

Thus, this introduced the intensity theory of pain, which gradually shifted the focus of pain research and treatment in the next century away from the peripheral nerves to the central nervous system. (1)

Charles Sherrington, who coined the term “nociceptor,” bridged the specificity and intensity theories, stating that “the main function of the receptor is to lower excitability threshold of the [reflex] arc for one kind of stimulus and heighten all others.”

This theory ignores the findings of specialized nerve endings that sense pain and focuses on the pattern in which neurons fire information to reach the central nervous system and the brain. It doesn’t support the idea that pain is a one-way path where pain is sensed from such “pain receptors nor is there a separate system for receiving pain.” Instead, the pattern is generated by a specific combination of stimuli and the brain is an “receiver” of this pattern. (7)

“In the consequent changes toward a re-establishment of equilibrium, impulses are aroused in the corresponding nerve fibers. We know little about single impulses or the activity of single fibers. Stimulation ordinarily results in the discharge of a group of receptors, which may be regarded as a unit occurrence.

“Particular experiences, e.g., wet, cold, or pressure, depend, for their similarities and differences, upon the ‘pattern’ or ‘arrangement’ of these discharges as a whole, such as the number of impulses involved and their temporal and spatial arrangement. Similar stimulus conditions will, from time to time, arouse similar conditions within the tissues, and these conditions will be accompanied by similar psychological experiences.”

While this theory isn’t entirely accurate, and we know that the brain is quite active in participating in pain perception, it paved way for future ideas, such as the central summation theory, sensory interaction theory, and the gate control theory of pain. (1, 8)

“It is evidence that the gate-control theory has taken us a long way. Yet, as historians of science have pointed out, good theories are instrumental in producing facts that eventually require a new theory to incorporate them. And this is what happened.” ~ Melzack, Katz (2013)

Home run toward the gate-control theory

Pain research has moved toward the CNS and the brain in the 1940s and 1950s, but research in the brain was still in its infancy. Psychology was gradually accepted as part of the pain explanation and later gave rise to the biopsychosocial model of pain.

Based on the intensity theory, Dr. William K. Livingston proposed the central summation theory, which refers to the reverberating circuits in the dorsal horn to explain chronic pain, even after the healing has completed.

Noordenbos’ sensory interaction theory in the 1950s proposed two systems: the slow unmyelinated and small myelinated afferent fibers system, which transmits pain, and the fast myelinated system, which is responsible for the other sensory perceptions.

This theory suggests the slow fiber system “projects to the cells in the dorsal horn and the summation of their input, once transmitted to the brain, is responsible for pain. The latter inhibits the transmission of impulses from the small fibers and prevents summation.” (8)

In 1965, Melzack and Wall proposed the gate control theory, which was built from the ideas of the specificity, intensity, and pattern theories of pain. It’s kind of like uniting different ideas together in one giant dish of salsa and settling some of the debate that has been going on for over 100 years. It also opened doors to new and effective types of treatments, including TENS, cognitive behavioral therapy, and other forms of neuromodulation, such as peripheral nerve, spinal cord, and deep-brain stimulation. (3, 9)

Even though the more recent theories of pain gave us a better and more accurate picture of how pain works, there are some issues that they do not address, such as psychosocial factors that contribute to chronic pain and how the immune and endocrine systems affect how people feel pain.

Given the unity that the gate control theory and later the neuromatrix theory of pain had provided, manual therapists can use these theories as a guide to explain pain to their patients and to provide quality care based on good scientific evidence. 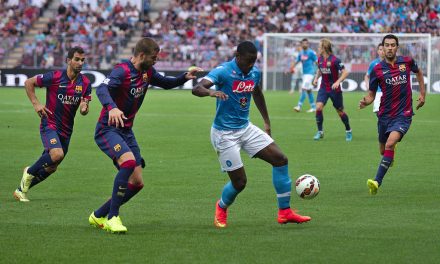 What Does a PCL Tear Feel Like? Treatment, Recovery, Evidence