What Is Kyphoscoliosis and How Serious Is It? 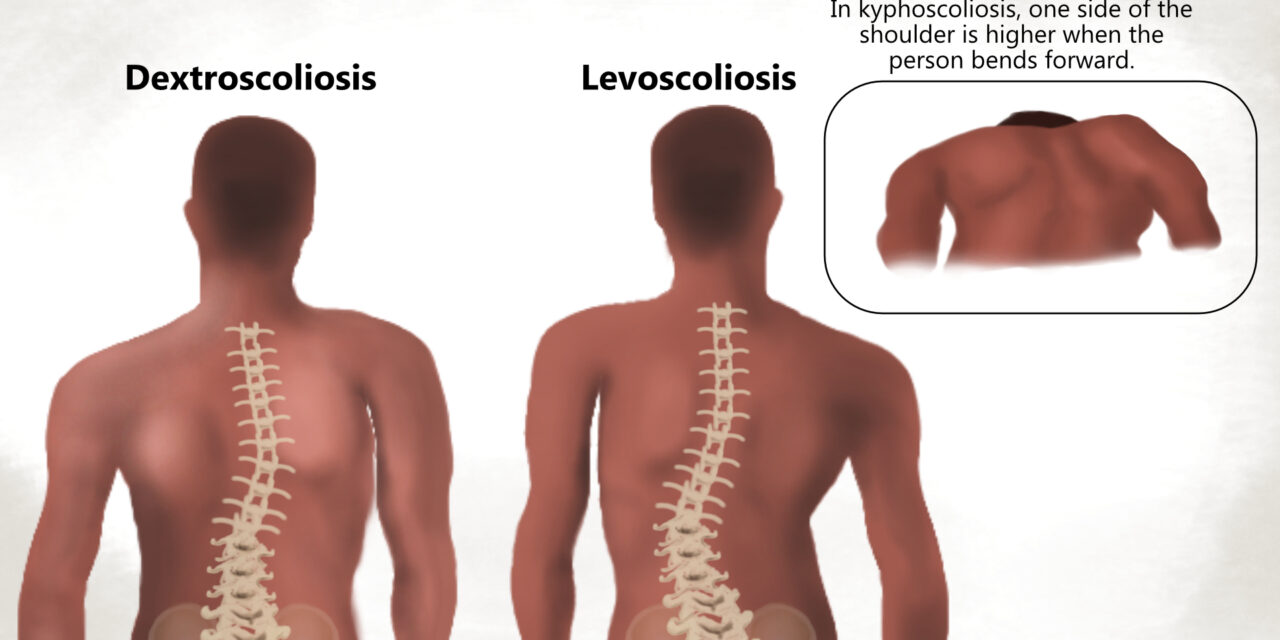 Kyphoscoliosis is an extreme form of spine deformity where the spine curves in the coronal and sagittal planes. This means that the spine hunches outward near the neck and upper back and of the mid or lower back curves side to side. Severe cases tend to have the back appear crooked or have the lower part of the spine curve inward, or even have one or more vertebrae rotated.

It affects 1 in 1,000 people on average, and every 1 in 10,000 patients develop a severe deformity that will impact their lives drastically. However, there are a few exceptions. For example, last June in SIMS Hospital in Chennai, India, 15-year-old Tesfaye Mengesha Mersha was diagnosed with an extreme case of kyphoscoliosis, who was one of the few people who was completely cured of the deformity.

Kyphoscoliosis has characteristics of both kyphosis and scoliosis. It may even feature two types of scoliosis where the curve starts either at the lower or upper thoracic spine. (Illustration by Nick Ng.)

“The disease could cause heart and lung failure,” said Dr. K. Appaji Krishnan, who was the lead surgeon of the team performing the spine surgery. “[He] was successfully treated and the patient is all better and in a good condition now,”

What is kyphoscoliosis and is it serious?

Kyphoscoliosis forces the spine to curve outward near the upper and lower spine. Sometimes it can twist off to the side or inward to the body, making the back look severely deformed. It can also cause the spine to curve inward, reducing lung and vital capacity down to 30%.

Complications of kyphoscoliosis can include:

Kyphoscoliosis can become extremely fatal fast if not treated within reasonable time. For example, a 26-year old Chinese woman was suffering from both thoracolumbar spinal stenosis (narrowing of the spinal cord) and kyphoscoliosis, which was considered dangerously rare with little room for treatment options.

The woman had no previous issues relating to spinal problems. However, two months prior to the hospital visit, the symptoms started to worsen. She could no longer stand or walk alone one month into the spinal pain.

After some careful testing, doctors discovered she was also suffering from pectus excavatum where the breastbone has sunken into her chest. The doctors have never seen all three deformities take place at once. To their knowledge, the caving of the breastbone due to a mix of kyphoscoliosis and thoracolumbar spinal stenosis has “not been documented previously.” Treatment options are “challenging because of its rarity,” they reported.

Does kyphoscoliosis cause back pain?

Kyphoscoliosis may indeed cause back pain. Severe kyphoscoliosis is known for bending the spine inward, restricting any movement side to side to the patient. This can increase the risk of low back pain and can lead to a severe deformity of the spine.

For example, a 2016 case report from Pain Medicine observed a 57-year-old woman who suffered with “severe idiopathic kyphoscoliosis” and extreme back pain on the left curve of her lower spine. She didn’t want surgery because of “risks of neurological damage.” And so, the doctors attempted to follow through with physical therapy, which showed optimal results for the woman six months later.

Although different forms of kyphoscoliosis may cause back pain, it is more than possible that some may not experience any spinal pain. However, scientific evidence in the past three decades found that posture alone is not a major cause of back pain.

In fact, researchers in 2020 pooled the data of 41 reviews and “found no consensus” that various body positions, such as prolonged sitting, standing, or bending, is a cause of low back pain.

Is kyphoscoliosis a form of disability?

Kyphoscoliosis for both children and adults can be considered a disability legally if it is severe enough. Children can qualify for scoliosis disability, and adults can enroll in SSI/SSD for benefits and accommodations.

Do you need a back brace for kyphoscoliosis?

Although it’s not necessary to wear a back brace, studies suggest that it can help with the pain associated with scoliosis, which is like kyphoscoliosis but without the hunching posture. However, a back brace is more efficient for young teens and children as their spine has not fully developed and can revert back from kyphoscoliosis.

A systematic literature review of a study based from 1967 to 2018 discusses how back braces were used to assist with the extreme pain scoliosis in patients. Most studies that were conducted reported “modest or significant reduction in pain,” and the patients seemed to have physically improved.

The limitations of using a back brace depends on the severity of the condition. Severe cases can result in up to 24 hours of constant bracing, while minor forms can lead up to only two hours of bracing. Overall, bracing can be used for kyphoscoliosis but usually under medical writing.

There have been links to kyphoscoliosis and EDS, better known as “kyphoscoliotic EDS”, which mostly occurs among children between infancy to age five. Although it’s the rarest form of EDS, it has similar traits as EDS among adults, including easy bruising and slow wound healing. Children with such conditions are described as “floppy babies” and had “a poor cry and difficulty in sucking.” This is due to muscle loss.

[Further reading: What Exercises Are Good for EDS?]

Can kyphoscoliosis be treated?

Kyphoscoliosis is usually corrected by surgery, however, some people prefer to not go through with it. Different treatments and procedures are based on age and the severity of the deformity.

For adults and those who do not want to go through with surgery, there are more options:

For asymptomatic or minimally affected individuals, specialists can “simply closely monitor over time” the deformity growing.

Physical therapy may help reduce pain and improve movement and function for kyphoscoliosis, but the current evidence only examines kyphosis and lordosis.

A 2019 systematic review and meta-analysis has shown that physical therapy can greatly reduce pain and may improve the spine’s posture. However, it doesn’t affect the lumbar lordotic lumbar angle much (inward curve of the lower spine).

The researchers concluded that stretching regularly, specifically the thoracic kyphosis angle (curve of the upper spine), may help reduce the pressure and pain if done constantly.

The study conducted two to three sessions per week for 8 to 12 weeks to show a significant difference. A specialist may require longer or shorter sessions depending on the severity.

Exercise depends on the state of kyphoscoliosis and pain tolerance. For scoliosis, exercise may help improve the spine’s posture (with or without a back brace, depending on your condition) as long as it is not right after surgery.

Spinal cord stimulation (SCS) is a therapeutic procedure that is recommended to patients who don’t want surgery for kyphoscoliosis. SCS is an implanted device that sends small electrical shocks to the spine and is often a “last resort” to the patient due to its possible complications.

If you’re suffering from kyphoscoliosis and couldn’t find or receive treatment for their back, you may feel helpless or lost on your healing journey. However, there are several ways (and helpful people) that you can get to live day by day with such a condition:

Having kyphoscoliosis doesn’t mean you should live with constant suffering and high disability. Living well with chronic pain is a theory created by Dr. Bronnie Lennox Thompson to help those who suffer with chronic pain. She uses different processes to help her patients who tell themselves that “I don’t feel like myself anymore” to better their lives and manage their chronic pain.

Thompson goes into depth on how a patient can live well and free while conquering the pain that comes with kyphoscoliosis. The theory of living well with chronic pain consists of a clear diagnosis, understanding symptoms, coping skills, and future planning.

Kyphoscoliosis may be extremely challenging for impacted patients. Dr. Thompson’s theory could ease the stress, pain, and mindset of those affected. They may start with either a diagnosis or understanding symptoms and instigate the person to start future planning and coping with their new lives in a positive direction.

There is no “right way or wrong way” to figuring out what works as long term self healing with any chronic pain. Patients that are diagnosed with kyphoscoliosis should have the opportunity to live a happy and pain-free life, especially if they decide to not go forward with surgery. 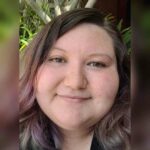 Dezare is a student attending San Diego State University in San Diego, California. She is majoring in Journalism with a minor in creative writing and plans to graduate in 2024. She is emphasizing news writing in her major.

While having adequate experience in writing news stories during her education, Dezare aims to obtain expertise in writing about other types of journalism. Her goals consist of earning a spot in an office with a vast newspaper company, alongside traveling to various places to capture photojournalism.

When available, Dezare loves to practice her camera skills and writing skills. She also enjoys hobbies such as cooking, animating, and working on creative writing side pieces. Making Sense About Massage and Low Back Pain With Dr. Christopher Moyer