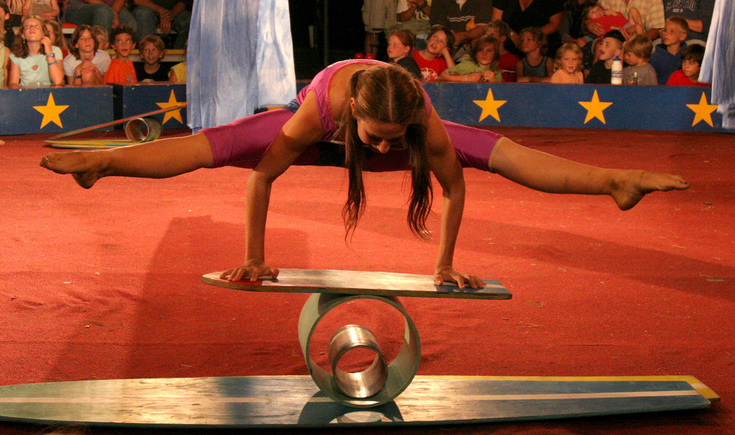 Recent research reveals that specific balance exercises do not carry over to a variety of balancing skills. Based on the SAID principle, you only get better at what you train to do.

The researchers concluded, “The balance training used in this study improved performance only in the specific task that was trained. There was no transfer to different tasks even when the device used was the same or when the direction of perturbation was the same.” (1) In other words, subjects adapted specifically to the task they were trained to perform. Sounds like the SAID principle, right?

Forty healthy participants in their twenties were divided into three groups: control, medial-lateral tilt on the Posturomed machine (P-ML), and medial-lateral on a custom-made tilt board (T-ML).

Before they started training, each person performed a pre-test and post-test by standing on one leg on the tilt board or Posturomed, a machine that “shakes” side to side like an earthquake simulator, as demonstrated in the German video below. The objective of the tilt board exercise is to maintain equilibrium. Each subject perform six training sessions on the same leg without a shoe throughout the two-week experiment. Each session consisted of 20 trials with each trial lasted 20 seconds with 10 seconds of rest in between trials and one minute of rest between blocks. Total session time was about 15 minutes. There are four variables in the pre-test and post-test:
​
1. T-ML (medial-lateral tilt)
2. T-AP (anterior-posterior tilt)
3. P-ML
4. P-AP

As predicted in the researchers’ hypothesis, each experimental group (T-ML and P-ML) performed better in the exercise that is closest to their trained exercise while the control group had little to no significant improvement in any exercise in the post-test. The T-ML group improved the most in the T-ML post-test but was no better than the control group in the P-ML post-test.

“To our knowledge, this is the first clear demonstration that the effects of balance training can be very task-specific and that it may not improve general balance ability, but rather only the specific skill that is trained,” the authors described. “This raises two questions: why are the effects of balance training so task-specific, even when using the same device or testing tasks with the same direction of perturbation? And how is it possible that many studies show that balance training is associated with performance improvements in balance tasks that were not trained or even in different types of tasks?”

Perhaps future studies could answer these questions. Based on this initial study on specificity and adaptation to UST, there could be a strong possibility that it — like other gross or fine motor skills— adheres to the SAID principle. Therefore, UST/balance training isn’t a general skill where you can put clients or athletes on an arbitrary balance device and expect them to carryover the training into the tasks they need to do.

Before you toss out your favorite UST device onto the gym floor, the authors indicated two limitations of this study. One is the duration — two weeks — which may be too short to conclude any long-term effectiveness of the training. Second, the one-leg stance may not apply to other stances or movements, such as standing on two legs or walking, as seen in two previous studies on slacklining that showed a lack of balance transfer to other skills. (2, 3)