How Do Muscles Contract? Have you ever wondered how you transform the idea of moving a muscle into a real-life action? It’s a fascinating yet complicated story.

Although we still have a lot to learn about how muscles contract, we do understand the basics of how the nervous system initiates a series of actions that contract a muscle.

And what about muscle movements we don’t consciously decide to make, like breathing, digestion, and heartbeats?

And even muscle spasms? The secret behind all these activities is muscle shortening, referred to in the physiological research literature as “contraction.”

It’s important for us to understand how muscle contraction works, so let’s begin with a clear and in-depth understanding of how muscle tissue works and how massage therapy can affect it.

Like other animals with backbones, we have three kinds of muscle:

Skeletal muscles undergo three different kinds of contraction: concentric, eccentric, and isometric. Let’s review these anatomical details to make sure that we’re on the same page.

Visualize a muscle at rest. It has a certain length and a degree of tension, and they’re going to remain more or less the same until the muscle’s environment changes when a force is applied to that muscle.

When a force is applied to that muscle, and the muscle resists that force, either the length or the tension of the muscle (or both) can change in response. The Greek and Latin names for the different kinds of contractions describe what happens when muscles work:

So the two main ways that a muscle can resist an outside force are to change its tension or to change its length. Let’s look at how that works in real-life examples.

When you lift something, pulling it closer toward your body, then the muscles that you are flexing (such as your biceps) are shortening in length. That means that they are making concentric contractions, from the Latin words “con” + “centrum,” meaning “together with” + “center.” 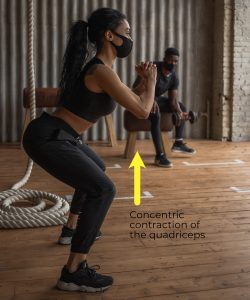 Concentric contraction is the shortening of muscle fibers. (Photo by Monstera Productions) 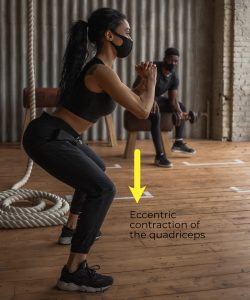 Eccentric contraction is the lengthening of muscle fibers. (Photo by Monstera Productions)

When you extend your biceps because you’re lowering something, or because what you’re trying to lift is too heavy to continue flexing, you’re experiencing eccentric contractions.

Clinically-important examples of eccentric contraction can include pain experienced during occupational motions, such as lowering heavy objects onto the floor.

Of course, in real life, there are always a mixture of different kinds of contractions happening at the same time, but these examples are classifications around which different types of muscle contraction tend to cluster.

So that’s what concentric, eccentric, and isometric contractions look like, but what causes them to work that way?

What model explains how muscles contract?

The sliding filament theory, with cross-bridge cycling as a molecular mechanism, is widely accepted as the best current representation of how muscles contract. Muscle contraction is understood as a cycle of smaller contractions, repeating at the molecular level.

The thin actin filaments and the thick myosin filaments overlap each other, permitting them to slide past each other to create the contraction. (Illustration by Nick Ng)

Sarcomeres, which are the basic structure of muscle fibers, contain thin and thick filaments. The thin actin filaments and the thick myosin filaments overlap each other, permitting them to slide past each other to create the contraction.

The cycle starts when a nerve impulse stimulates muscle fibers, and as a result, calcium ions are released. These calcium ions bind to the actin (thin) filaments, causing the previously bound myosin binding sites to become available. They still contain adenosine diphosphate (ADP) and phosphate molecules from previous contractions, which they release.

The release of ADP and phosphate free up the binding sites, which bind once again to the actin filaments. The “heads” of the myosin molecules then slide in the direction of contraction, and the actin bound to them are pulled along.

ATP (adenosine triphosphate) then binds to the myosin heads, breaking their connection with the actin until the next cycle. The myosin breaks the ATP down into ADP and phosphate and is ready for the next cycle to begin.

Muscle “release”—what does it really mean?

The word “release” can be confusing when we’re talking about massage’s effects on bodies. When a client uses it, they are often describing what their experience feels like to them, like muscle soreness or tightness. But as we’ve seen over and over again, what’s really going on in our bodies can often feel like something very different than what is actually taking place.

Physical therapist and educator Walt Fritz, who treats muscle tension dysphonia and dysphagia (voice and swallowing disorders) with a style of manual therapy bearing the old name of “myofascial release,” in Rochester, New York, takes a different approach to describe it.

“When my patient uses it I allow them their perspective without judgment, though I may ask them what they mean by the statement,” he said. “However, in a professional vernacular, it needs to be explained and validated. We are all too familiar with the sloppiness of the term, or the coded way in which it’s spoken.”

This term was attached to that particular style of manual therapy in the 1800s when there was much less understanding of how bodies work than there is today. The old explanations remain widespread in the massage therapist community, however, promoting misunderstanding and damaging its credibility.

The only tissue that we can directly access is the skin; it strains trust with clients and with healthcare professionals to claim that we can manipulate patients’ muscles and connective tissue fibers in any kind of intentional way.

Think back to muscle anatomy and physiology class. Remember when you learned that a skeletal muscle has an origin and an insertion. Although the insertion may move closer to the origin when the muscle is flexed, the actual structure is not changed.

Since length and tension are the two things that can vary in muscle contractions, neither stretching nor massage can change the actual length of the muscles. The change in tension in a healthy muscle can be experienced as “lengthening” the muscle. There’s a pathology of muscle contraction, however, where the prognosis is different.

[Related: Can Your Massage Therapist Stretch Your Fascia?]

Two of my former patients taught me a great deal about what massage could and could not achieve with contracture that had lasted for years. Their names are changed to keep their privacy.

Grace was a good-natured 79-year -old woman who had spent her life in a wheelchair, due to severe contractures that prevented her from being able to stand up straight or to walk, and that left her in constant pain.

Her mother had died giving birth to her, and Grace had been deprived of oxygen for several crucial moments during the birth. She had been institutionalized for most of her life, due to her severe disabilities, including cognitive developmental delays.

Mehmet had been a small businessman until he was severely burned in an explosion. The doctors in his country had managed to save his life, but he was left with so much scar tissue that his hands and face were severely contracted. He came to the U.S. to seek further medical reconstructive treatment.

Both Grace and Mehmet were experiencing similar symptoms, although the causes were very different. Contractures are permanent shortening contractions of muscle tissue, leading to fibrosis, atrophy, and tissue death.

Both of them sought massage therapy in the hope of accomplishing some release (by which they meant lengthening) of the contractures, and in both cases, we ultimately were unable to accomplish that for the most part, although Mehmet was able to gain a little more flexibility in his jaw area.

If either of them had been able to seek treatment earlier (in Grace’s case, decades earlier; in Mehmet’s case, years earlier), it’s possible that enough stretching as part of a complete team healthcare treatment plan might have been able to help them preserve some flexibility and make the contractures less severe.

Thus, it’s extremely unlikely that stretching could have completely prevented their contractures, but if they have sought treatment earlier, they may be more likely to slow down the symptoms.

What do muscles “release” during a massage?

As nucleated cells, muscles undergo metabolism as any cell does, taking in oxygen and nutrients, and producing water, carbon dioxide, and ATP.

Under certain exercise conditions, muscles can produce lactate and pyruvate as a byproduct of breaking down glucose.

These metabolic biochemical processes are all reasonably well understood and are a crucial part of normal muscle function.

There is, however, a persistent strong belief among some massage therapists that massage causes muscles to “release toxins.”

If you ask them to explain exactly what these toxins are, or how massage gets them out of individual cells, or what happens to them once the cells produce, then you might get vague, confusing, and self-contradictory answers.

There’s no evidence and no scientific basis to believe that massage can cause individual muscle cells to “release toxins,” yet this belief has a certain appeal for many massage therapists.

Some massage schools persist in teaching it, despite the harm of misleading clients, and communicating to other healthcare professionals that they’re not willing to commit to the shared body of professional knowledge about how bodies work

The cross-bridge model describes how muscle contraction and relaxation occur, as a result of molecular interactions among actin and myosin filaments in muscle fibers.

Neither massage nor stretching (or similar methods like foam rolling) actually lengthens muscles, although the change in perception of tension may be experienced as lengthening.

Muscle cells undergo the same metabolic processes as other cells do, and they have similar inputs and outputs for cellular respiration. There’s no evidence or plausibility that massage causes muscles to release toxins.

On its own merits, massage therapy can be an important part of self-care, wellness, and fitness and can contribute to a program of healthy exercise.