Why ‘Energy Work’ Is at Odds With Ethics in Massage Therapy One of the biggest dividing lines in massage therapy is between evidence-based practitioners and therapists who practice ‘energy work.’ Both terms can be vague since there are many methods and modalities of massage, and many of them fall into the energy work. category. Some have been around for many years, which doesn’t mean they are valid. There is often somebody claiming to re-invent a “new” one.

One major chasm is the perpetuation of massage myths, such as massage can “flush toxins” and lactic acid, stretch fascia, cause a miscarriage if you rub the ankles, which are still taught in many massage schools. There seems to be a tendency to ignore the sciences of anatomy and physiology in favor of making up false theories about the body and how it actually works.

Massage therapists in all regulated U.S. states are obligated to abide by a code of ethics. All professional massage associations have a code of ethics; state boards have a code of ethics, and even some massage schools have their individual code, but they all have the same intent: public protection. That encompasses honoring the clients’ right to privacy, confidentiality, and refusal, safeguarding their modesty, avoiding sexualization massage, and striving to improve professional knowledge and competence through continuing education.

Many associations related to energy work also have ethical codes. For example, the International Association of Reiki Professionals, which I personally was a member of for many years a long time ago, has a code of ethics very similar to those of the professional massage associations. This includes observing confidentiality, treating clients with respect, informing them thoroughly of what will happen during a session, refraining from diagnosing or prescribing, observing client-practitioner boundaries, and referring to medical professionals when necessary. (1)

The great divide seems to come down to one thing: reality. Those of us who adhere to scientific principles discredit those who claim to be channeling universal energy, balancing chakras, releasing energy blockages, laying crystals on people in the interest of healing, manipulating visceral organs, making infertile women fertile, and other common claims. Science-based practitioners often accuse such claims as unethical behavior and charlatanism.

After years of practicing energy work, I’ve wondered if this would be an issue at all, if not for the fact that so many people practicing supernatural and metaphysical things are also practicing massage therapy. I felt some investigation was in order, but scientific data on such things is hard to find. I turned to Harris Polls, which has been around since 1963, and conducted thousands of surveys of Americans to gather opinions on everything from politics to sports to religion. A search through their website revealed several polls about beliefs in the supernatural. Harris periodically repeats polls to see how attitudes have changed. Image: Laura Allen, based on the Harris Poll

Another Harris poll from 2015 showed 2,252 adults on the subject of alternative healthcare revealed: 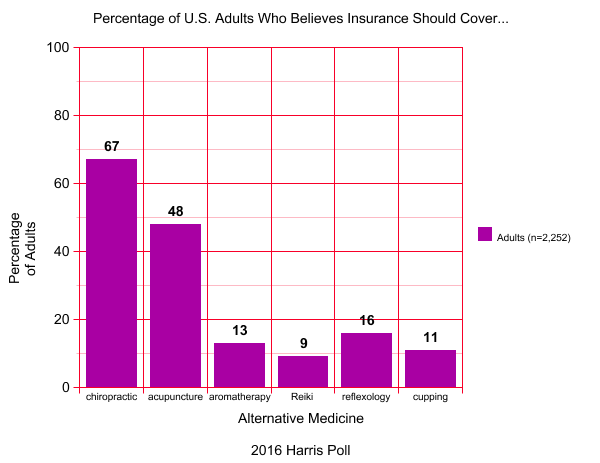 Image: Laura Allen, based on the Harris Poll

There is no scientific evidence of any connection between a spot on the foot and an internal organ, or the existence of meridians, chakras, or other things that many alternative therapies are based on. There is no scientific evidence that gods or ghosts or such supernatural entities exist, yet hundreds of millions believe in the Christian god or other higher power, whether they call it Spirit, the universe, the goddess, or whatever, and the same goes for the belief in ghosts. Millions more around the world believe in their cultural dieties, the evil eye, the influence of ancestral spirits, nature spirits, and other things that aren’t explained. There’s no scientific evidence of any correlation between people believing in god or ghosts, and believing in reflexology or balancing chakras, but I bring these beliefs up because it’s not unreasonable to think that people who have a tendency to accept or embrace the supernatural in one facet of their life would accept or embrace it in others—practitioners and clients alike.

It is not only the lack of scientific evidence for many practices and attitudes that have become associated with massage that is distressing to those who would like to see massage therapy accepted as a healthcare profession; it is the fact that there is direct evidence to the contrary for many of the things that have become associated with massage. And yet, that has not deterred support for these things from the professional massage associations, like the National Certification Board for Therapeutic Massage & Bodywork (NCBTMB), and state boards, who commonly accept continuing education for things that are contrary to science, and most massage publications, who print and publish articles related to said beliefs and modalities and accept advertising for them. You’re not going to see ads for fascia-blasting tools in medical journals.

I perused a number of medical continuing education websites to see the offerings, and every one of them had the term “evidence-based” on the website. Approved continuing education for physicians includes classes like “Virally Sexually Transmitted Infections,” “A Review of Interventional Radiology,” and “Medical Error Prevention,” while approved continuing education for massage therapists includes such offerings as “Healing with Gemstones,” “Esogetic Colorpuncture,” and “Raindrop Harmonics.” The NCBTMB has one page of class offerings in the area of documentation and SOAP charting, five pages of classes on working in clinical settings, and 71 pages of classes in energy work.

Physicians go through a rigorous, science-based education to earn their license. That should not be construed to imply that they don’t have religious faith, or that they don’t have beliefs in the supernatural, or that those beliefs don’t carry over into their work. There are videos of doctors leading their operating room team in prayer before performing surgery.

According to MergerWatch, a watchdog group that has the goal of protecting patient rights through mergers, 14.5 percent of all acute care hospitals in the U.S. are now owned or affiliated with the Catholic Church, and 46 Catholic-restricted hospitals are the sole provider of acute care in their geographic regions. (4) The United States Conference of Catholic Bishops issues a publication entitled Ethical and Religious Directives for Catholic Health Care Services, which has the premise that guidance for ethical decision making is never to be contrary to Church teachings. (5) There are more than 650 hospitals in the U.S. affiliated with various religions, and in spite of that, physicians are not getting credit for maintaining their license by taking CE classes in “Healing Cancer with Prayer.”

They are obligated to take evidence-informed continuing education, regardless of any personal spiritual and/or supernatural beliefs. However, hospitals associated with Duke University, Yale, Johns Hopkins, the University of Florida, the University of Arizona, the University of California, and other top medical research centers are on the bandwagon with energy healing, acupuncture, homeopathy, herbal therapy, “detoxification,” and other unproven (or disproven) methods for the treatment of illness—to the delight of some and dismay of others.

“We’ve become witch doctors,” said Dr. Steven Novella, a professor of neurology at the Yale School of Medicine. Novella, a long-term critic of alternative medicine, is alarmed about top-tier hospitals backing therapies with scant evidence behind them.

“Patients only want [alternative medicine] because they’re being told they should want it. They see a prestigious hospital is offering it, so they think it’s legitimate,” said Novella.

Another critic is Steven Salzberg, a biomedical engineer at at Johns Hopkins who lectures in the medical school. “The perpetuation of these practices is a victory of marketing over truth,” said Steven Salzberg.

“If a hospital is “offering treatment that’s based on fantasy, it undermines the credibility of the institution.” (7)

That same credibility problem keeps massage therapy from moving into mainstream medical care—although we are welcomed in the above-mentioned institutions and others who are embracing alternative medicine. Healing Touch, an energy-based therapy, is described on the organization’s website in the following way:

Healing Touch is a biofield therapy that is an energy-based approach to health and healing. It uses touch to influence the human energy system, specifically the energy field that surrounds the body and the energy centres that control the flow from the energy field to the physical body.

These non-invasive techniques utilise the hands to clear, energise and balance the human and environmental energy fields, affecting physical, mental, emotional and spiritual health and healing in a positive way. Healing Touch was founded by Janet Mentgen, RN, BSN, who has practiced energy therapies since 1980.

Healing Touch was actually the first class I took in 1993, five years before I entered massage school. In 1996, the organization founded a research program, which to date, has produced qualitative, quantitative, and mixed-method studies. A statement on the website reads:

Qualitative studies help elicit themes that cannot be measured with numbers, such as spirituality, caring, hope, loss of time, etc. (8)

There’s the rub, stated in their own words: these studies are not used to determine the effectiveness of interventions. Will anyone argue that caring and hope are not something that people who are sick or in pain benefit from?

As Dr. Christopher A. Moyer explains in his video, he discusses reiki research, you can’t jump to the conclusion that there is a human energy field that another person can manipulate, nor separate the fact that when Reiki (the particular modality discussed in this video) is being offered, the recipient is benefiting from having a social visit with someone who is offering them focused attention and caring and compassionate touch. Spirituality and experiences are an individual thing, and we can’t judge the person who feels they benefit from a practice that is not supported by scientific evidence, but we regularly judge the practitioners.

Another ethical issue is that clients often view massage therapists as healthcare experts, although most therapists have only a fraction of the education required of doctors and other healthcare providers. The same power differential that exists between doctors and patients exists in the therapeutic relationship between massage therapists and their clients. Clients tend to view us as authority figures, ask us to “diagnose” their conditions, ask us “what will cure so-and-so,” and all too often, receive false information, personal stories that have no basis in reality, and the dangerous advice to seek alternative therapy for something that requires medical intervention.

We’re at an impasse. It isn’t going away, and it isn’t getting better. As more hospitals and doctors condone and promote practices that are contrary to science, massage therapists will feel free to continue doing the same—ethical or not.

Science-based practitioners have often used the argument that “medical science does not promote faith-based/fantasy- based practices,” but that doesn’t entirely hold up anymore, as more prestigious hospitals are in fact doing so, even though individual doctors associated with said facilities object. As individual practitioners, we can continue to argue in our Internet forums, try to educate, and point out the lack of critical thinking, fallacies, myths, and outright falsehoods about anatomy and physiology.

In reality, the percentage of those whose minds can be changed are probably small. We’re probably no more likely to change their minds than they are to change ours.

The reality is that human beings embrace the supernatural in many facets of their lives, and the state boards that regulate massage—their codes of ethics notwithstanding—continue to allow schools to offer entry-level education that includes disproven subject matter, continue to allow it for continuing education for license renewal, and the professional associations that represent massage therapists continue to promote such things in the interest of advertising dollars.

This chasm will never be crossed. Laura Allen is President of Sales & Marketing of CryoDerm. A graduate of Shaw University and The Whole You School of Massage Therapy, Allen has been a licensed massage therapist since 1999 and an Approved Provider of Continuing Education under the NCBTMB since 2000. She has taught classes all over the U.S., Canada, and Europe.

She is the author of The Educated Heart, Cultural Crossroads of Healthcare and Healing, and numerous other books. Allen resides in North Carolina with her husband, James Clayton, and their two rescue dogs.