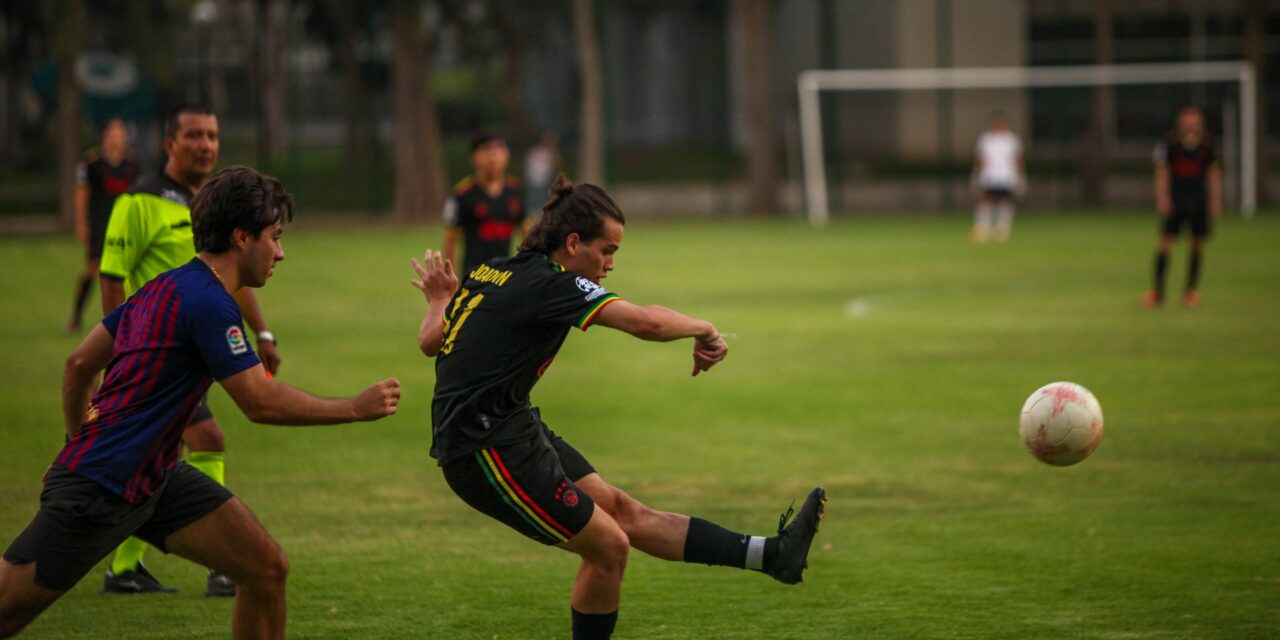 A calf strain, or a pulled calf muscle, is when a muscle in the back of the leg is overstretched or torn which can also cause pain in the back of your knee. These muscles include the gastrocnemius and the soleus.

The former is in charge of elongating the foot and toes whereas the latter’s primary movement is pointing the toes to the nose.

The most common area to strain is the inner belly of the gastrocnemius muscle. This is the most superficial layer of muscle on the back of the leg. If you aren’t sure what muscle is strained, you can use gentle movements to discover the problem area. If there’s more pain when you point your toes, then the most likely culprit is the gastrocnemius.

However, if pointing your toes to your nose brings the greatest amount of pain, then the soleus is the injured muscle.

Outside of a clinical setting, there may not be a great need to know which muscle is affected. Once  rehabilitation begins, knowing the muscle becomes necessary to ensure that the correct muscles are being worked. 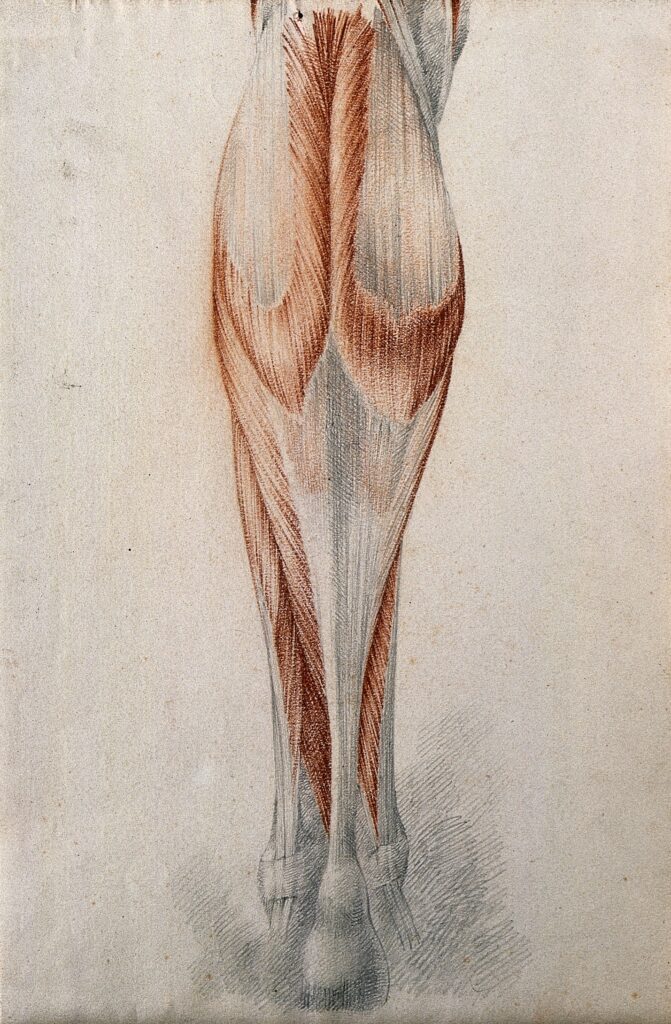 Credit: Wellcome Library, London. Wellcome Images. images@wellcome.ac.uk
Muscles and tendons of the lower leg and foot, seen from behind. Red chalk and pencil drawing by or associated with A. Durelli, ca. 1837. (Image distributed under the Attribution 4.0 International (CC BY 4.0))

Is a strain the same as a sprain?

Ligaments are flexible tissues which connect a bone to a joint. Tendons are the connective tissue for muscle to bone.

Sprains are a stretched, torn, or ripped ligament which is most often caused by traumas like falling, twisting, or getting hit.

Strains refer to tendons that are stretched, torn or ripped. This can be caused by mild traumas, but they can also be caused by overuse.

As you can imagine, there would be a significant difference between a soccer player kicking a winning goal versus the repetitive motions of daily life. Three different classifications for strains exist, each with their own characteristics, symptoms, and recovery time.

Grade I, the mildest classification, less than 10% muscle fiber has signs of agitation. With this injury you probably won’t lose much strength or range of motion though you will experience mild muscle spasms and/or swelling often seen with exacerbated use of the muscle.

Next on the scale of severity would be grade II. Here the injured muscle will have an obvious decrease in both strength and range of motion. This type of injury causes damage from 10% to 50% of the muscle or connective fibers. Grade II is most often caused by mild trauma which would make you unable to continue using the injured muscle.

With the severity of a grade III, you’re likely to feel a deficit, nothing where something used to be, or a mass. A mass at an injury site could be several different things from a hematoma to a bulging muscle. It’s important to consult a medical professional with any grade III as some may require surgical intervention.

What causes a calf strain?

Injuries of this kind commonly affect athletes since this type of injury is often caused by “a sudden pushing off movement or over-stretching.” Many factors can affect the odds of injuring the calf muscles, such as cause or overuse.

Sports like football, soccer, and rugby have reported higher numbers of calf strain, but since blunt force is a common factor in this kind of injury, it would be easy to surmise combative martial arts would also be a high-risk sport for muscle strain.

No injury will feel the same to everyone and it’s going to feel different depending on its severity.

At grade I, there may be a sharp pain when the injury occurs, or if it’s the result of overuse, the movement which causes the problem will become painful.

A grade II strain will be accompanied by a sharp pain resulting in an inability to walk after but grade III will cause severe pain to the point of disability with no muscle function.

Treatments for a calf strain

There are many different treatments for calf pain from grade I to grade III. The treatment you pursue should be the one that is best for your specific injury.

Understanding which treatment will be the best option for any given injury comes with knowing what the body’s process of healing is. There are three stages in the healing process for any injury:

RICE is the acronym for: Rest, Ice, Compression, and Elevate. If you ever went to the nurse’s office in school for an injury, then you are probably familiar with RICE.

In recent years, there have been several studies which have questioned the validity of this method first created by Dr. Gabe Mirkin in 1978, due to the lack of clinical studies and subsequent evidence.

Mirkin himself recanted his own theory in 2015 after further studies revealed applying ice to damaged tissue is more likely to cause further damage by preventing the tissue from healing.

Although studies on compression and elevation are inconclusive, there are arguments for both sides. One study found intermittent compression can allow for better stabilization and assist in blood flow, but prolonged compression and immobilization may be detrimental to the healing process.

Hydrotherapy is the use of water to alleviate muscle tension, heal and reduce injury. One of the more common forms of hydrotherapy is cryotherapy, but this term can be used for any method in which extreme cold is used, not just water.

Contrast water therapy submerges the body or affected area in water, alternating between hot and cold creating a pumping action between the cold which slows processes down and heat which speeds the system up by increasing circulation.

Blood flow restriction therapy is when pressure is applied to an extremity with the intent of limiting the blood flow while either passive or active movements are being applied. Since this method requires use of the muscle, it’s best applied after the injury has progressed out of the acute stage.

Small movements combined with limiting the flow of blood has shown results that this kind of treatment can prevent the atrophy often accompanied by disuse.

There are many factors involved that alter which method of movement or the amount of pressure used and should only be done with the supervision of a medical professional.

But activities that involve high output workouts are contraindicated for calf strain until healing has reached a certain point, but resting the muscle too much can hamper the muscles ability to heal.

All forms of exercise should be avoided when in the acute phase, which is the first 24 to 72 hours. During this time, your body is removing damaged tissues from the area to set the muscles  up for recovery.

Once in the subacute phase gentle exercises or physical therapy are optimal for the recovery process, but the type of exercises will vary depending on which muscle has been damaged.

Physical therapy can be tedious because recovery is often slower than we like, even when we do everything right. The body has its own timeline, whether you want to gain muscle, lose weight, or need to heal, and all we can do is help it along.

Physical therapy isn’t just about healing the damage; a therapist can show you how to reteach your body  to move better through repetitions that instill muscle memory to ensure proper movement mechanics which can help to prevent future injury.

If you’re going to a physical therapist for a pulled calf muscle, the first thing they’ll do is determine which muscle has suffered injury.

Early on, a physical therapist may want to avoid working on the injured muscle, instead helping to strengthen the most common assisting muscles first. This gives the muscle time to heal, while allowing you to ease into the strengthening required and vary depending on the muscles that need work.

Next, the therapist will assign exercises to retrain the muscle group to work together while strengthening the injured muscle. Some of these exercises may include: stairs, single leg calf raise, and walking drills, working up to: running drills, balance exposure, and resistance drills.

Surgical intervention is typically only needed for grade III calf strains where the tissue has completely torn or with circumstances in which complications have arisen. In the case of tearing a surgeon will reconstruct the structure and remove any scar tissue.

Though the surgeon will remove scar tissue for the injury, the surgery itself will also create scar tissue in order to heal any incisions made.

Any type of surgical intervention will come with complications including infection, hemorrhaging, shock, deep vein thrombosis (DVT), among others, but operative intervention is sometimes required to bring the body back to optimum health.

When it comes to any type of muscle strain, taking preventive measures is the best way to take care of the body.

For calf strain this comes in the form of all those lovely things your doctor, trainer, physical therapist or massage therapist are always harping on about: stretching, warming up the muscles, and massage.

Compression socks can be used to assist in prevention by increasing the oxygenation of the muscle group, but they should not be the only preventative measure that is used.

Compression allows for the force exerted on the muscle to evenly distribute throughout rather than the force targeting a specific area causing a small portion of the muscle to take on the brunt of the work.

Sometimes getting frequent massages is not fitting either due to time or finances, but using foam rollers on a regular basis will soften the superficial layers of tissue to aid in helping those muscles with their ability to fully relax.

Massage therapy for a calf strain

Massage therapy is generally contraindicated for calf strain during the early stage. But an exception can be made for lymphatic drainage as this form of massage does not access the muscle.

Instead, it assists in the circulation of fluid that carries the damaged tissue so it can be discarded.

As the injury passes into the subacute phase, friction massage can be applied to the injury site. The best technique to utilize when working with a strain would be cross fiber friction.

But for general pain relief, most types of massage can do the job as long as it does not cause further tissue damage or inflict pain. 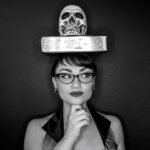 A Disc Bulge Does Not Always Correlate to Back Pain 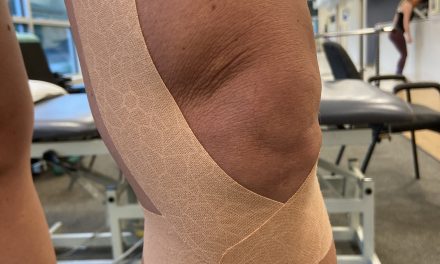 How to Apply Kinesio Tape to Your Knee and Does Taping Really Work? (2022) What Is Lordosis and Do You Need to Fix It?