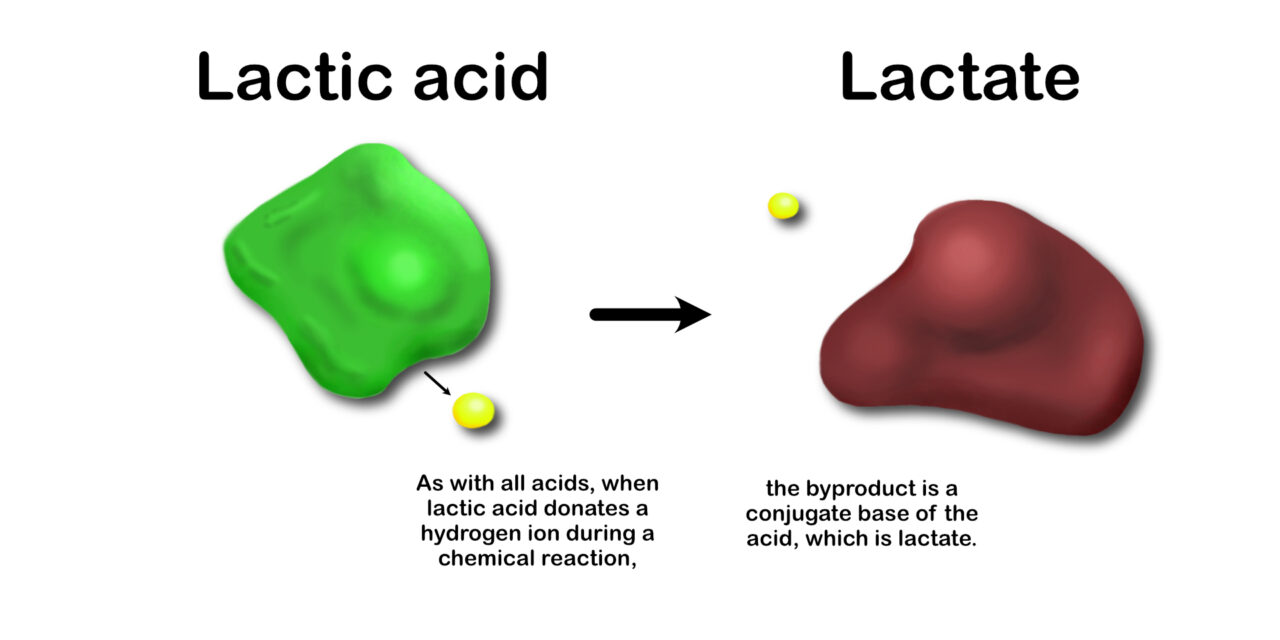 You may have heard the terms “lactic acid” and “lactate” if someone is talking about muscle soreness and exercise, and they are often used synonymously as if they are the same things—but they’re not!

The major difference between lactate and lactic acid is one hydrogen atom in the molecule. All acids have a positive charge (+), indicating that it has a hydrogen atom to donate (H+). So after it gives away that atom, lactic acid becomes lactate, which is a conjugate base with a negative charge.

Lactic acid is something that you find in some fermented foods and drinks that give a sour taste, like yogurt, kimchi, sourdough bread, and even beer. It was discovered by the Swedish chemist Carl Wilhelm Scheele, who identified it as a specific chemical compound in 1780.

Lactate is something your body produces to continue exercise for a short while when your heart and lungs cannot work fast or hard enough to get enough oxygen to your muscles. Thus, your body uses anaerobic metabolism to use the glycogen that is stored in your muscles and liver for fuel. Through a series of steps, this storage becomes a compound called pyruvate, which is turned into lactate.

Most cells in your body use a metabolic pathway called glycolysis, which is responsible for the breakdown of glucose. Glycolysis is one of three main biochemical pathways used by muscles to produce the ATP (adenosine triphosphate) needed to support muscle contraction and relaxation during exercise. The other two pathways are phosphocreatine breakdown and mitochondrial respiration.

With moderate to high-intensity exercise, lactate production can exceed the rate of how much the mitochondria can process and shuttle it away, which causes a buildup of lactate inside muscle cells and the release of lactate into the blood. This increases blood lactate concentration that is proportional to the duration and intensity of exercise, which eventually causes muscle fatigue where your muscles cannot contract efficiently to sustain the exercise.

Dr. Stephen Roth, who is the Director of Public Health Sciences at the University of Maryland, mentioned in Scientific American that this is your body’s way to “prevent permanent damage during extreme exertion” by slowing down the muscle contraction.

“Once the body slows down, oxygen becomes available and lactate reverts back to pyruvate, allowing continued aerobic metabolism and energy for the body’s recovery from the strenuous event,” he wrote.

This pretty much dispels the common belief that massage therapy can “remove” lactic acid or lactate from your muscles.

Lactate is very important in muscle physiology because exercise causes your muscles to produce it from glucose and to use it for energy. But it’s lactate—not lactic acid—that carries out the metabolic function.

Sporting activities with such repeated bouts include soccer, hockey, and football, where rest periods between bouts may be much less than 10 minutes. In contrast, heavy weightlifting, while intense, does not result in much, if any, muscle or blood lactate build up because the energy needed by muscles in short-lasting work is nearly completely supplied by phosphocreatine breakdown. In between reps, phosphocreatine recovery occurs rapidly (two to five minutes) mainly by increased mitochondrial respiration, not by glycolytic lactate production.

Increased muscular activity results in the breakdown of glucose with the production of ATP and lactate. Some of the lactate produced inside cells goes on into the mitochondria where it undergoes further metabolism (lactate oxidation) to produce more ATP via mitochondrial respiration. This is why endurance athletes can sustain their sport for a long period of time.

As you can see, this pretty much dispels the common belief that massage therapy can “remove” lactic acid or lactate from your muscles since your body already has the system to shuttle and recycle energy via anaerobic respiration.

Does lactic acid cause muscle acidosis?

The short answer is no, but that doesn’t explain why lactic acid or lactate doesn’t cause muscle acidosis. Typical physiology textbooks often depict the extra proton accumulation in glucose metabolism to be responsible for muscle acidosis. But what looks ideal in a math equation does not necessarily reflect what actually happens in our body.

Scientists can count the number of protons mathematically in metabolic reactions or take measurements of the pH level. But both methods are incomplete because scientists have not accounted much of the roles of water in biochemical systems, which makes the process more complex than on paper.

Acidosis is therefore best understood not by dissecting a series of individual reactions, but by examining all of the biochemical, chemical and physical processes that occur simultaneously. Trying to do this is very complex, so the natural inclination is to simplify — and in the process — describe the situation incorrectly or, at best, poorly.

In fact, this idea came from studies on frog muscle conducted at low temperatures, which doesn’t translate well to living, warm human bodies. Newer research also finds that acidosis contributes to allosteric regulation, which is where enzymes change their shape to fit into a molecule, like a protein. This process increases or slows the rate of some enzyme reactions.

So the best answer we currently have for what contributes to acidosis in contracting muscle still comes from using the physico-chemical approach. What does matter is that muscles do become acidotic with increased activity, and so do our bodies. Acidosis has been given a very negative association over 150 years of scientific study, beginning with Berzelius reporting lactic acid in muscles (dead or dying) from hunted stags.

What can be done to change the lactic acid narrative?

So despite decades of research, replicated studies, and publications about lactate, many universities and colleges still teach what was found a century ago. This information gets passed on to patients, the public, and the media, which continues the lactic acid myth cycle. The primary problem comes from how physiology is taught.

But this can be corrected.

The work and teachings of physiologist George Brooks at the University of California Berkeley, who has been at the forefront of lactate-related research for about 60 years, has published a series of reviews in the past six years about lactate metabolism. It will take time for this and the mechanistic research of his group and others to become mainstream. In some ways, the outdated yet popular lactic acid narrative is as problematic for exercise scientists as many massage therapy myths to manual therapists, such as sweating can remove “toxins” from your body or massage can release lactic acid from muscle tissues. Dr. Mike Lindinger is a comparative animal physiologist and nutraceuticals specialist. He has been studying lactate metabolism in muscle, people and animals for 35 years. He received his training at the universities of Guelph, Victoria, McMaster, and Hannover and has worked with dozens of researchers on various physiology and nutraceutical research and development products.

He current serves industry and the public as President of the Nutraceutical Alliance, which helps people and companies develop functional and safe nutraceutical products for people and animals. He serves as an editorial board member for several human and veterinary science journals, and regularly presents science to the public in ways that non-scientists can understand. 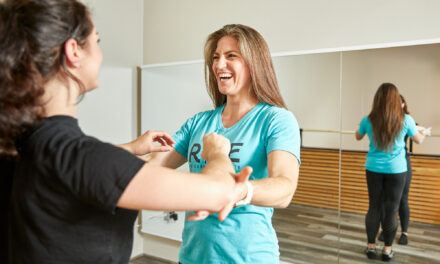 Physical Therapy for Dancers: What Do They Do?