Should You Get a Massage For Muscle Soreness? What current research says about the effectiveness of massage therapy for muscle soreness can help you decide if you should get one or not.

While some of my clients had came to my practice for pain relief relating to muscle soreness, a few of them felt more or less the same the next day. To these few, the relief fizzled away and the familiar achy sensation returned to their thighs, lower back, or shoulders. For others, the relief lasted for three to four days as their soreness dwindled to the point where they can resume exercise with very little issues.

It is really hard to say why some people feel better after a massage and some do not. Stress relating to work, family, and personal health, medications, prior experience and expectations to treatments: all of these factors among many can affect a treatment’s outcome. Not even the latest scientific evidence on massage therapy for muscle soreness can tell whether it really “works” or not. However, there is something that we can all learn from that a recent study that got many massage therapists excited on social media in the spring of 2018.

What the 2018 review on massage and muscle soreness found

Researchers from the University of Poitiers in France concluded that massage therapy “seems to be the most effective” for delayed-onset muscle soreness (DOMS) and perceived fatigue. Lead by exercise scientist Olivier Dupuy, the team divided 99 qualified studies into four categories: 80 for DOMS, 17 for perceived fatigue, 19 for inflammatory markers, and 37 for muscle damage marker. Some of these studies overlap more than one of these categories. (1)

They compared various methods of recovery, including massage therapy, cryotherapy, compression garments, low-intensity exercise, stretching, electrical stimulation, and various types of water therapy. After they pooled and analyze the data, they found that massage therapy “to be the most powerful procedure that induced significant benefits of DOMS and perceived fatigue, regardless of the subjects (athletes, sedentary subjects).”

Compared to massage, compression garments and water immersion had a lesser degree of positive effect. “Active recovery, contrast water therapy and cryotherapy had a positive impact only on DOMS, whereas massage combined with stretching also induced benefits in perceived fatigue. The other techniques did not have a significant impact on DOMS or fatigue but had some effects on [inflammatory marker] concentrations in the blood,” the researchers reported.

Massage therapy scored high in muscle soreness recovery, but there is a catch

Before massage therapists post this study on their website to declare that massage therapy “works” for muscle soreness, there is a deeper plot than what the conclusion and results say. Like a mystery film where the police had captured the suspect and the audience thinks that the crime is solved, one detective finds some evidence that the case is not truly over. There is still another suspect at large and could start the crime spree all over again. The suspect they had arrested is just a distraction.

Physicist and journalist Alex Hutchinson of Outside magazine is like that detective. He pointed out the funnel plot graphs in the study that show the number of studies included, the quality of those studies, and whether the results are. (3) Basically, the funnel plot is like a checklist to see whether publication bias exists in a meta-analysis and systematic review.

Because most of the massage studies included have small sample sizes, the chances of getting a very positive or negative outcome is no better than a coin toss—even if the treatment does nothing. The positive ones would likely get published while negative ones get tucked inside a “file drawer” as the researchers move on to the next project. Therefore, if you Google “massage therapy muscle soreness,” you might see mostly positive results.

“The funnel plot offers a way of checking if this is what’s happening,” Hutchinson wrote. 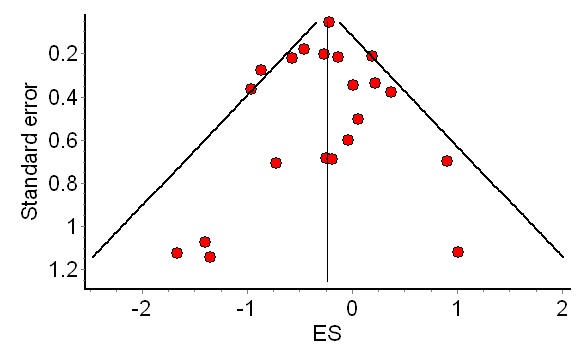 Higher-quality studies are have more precision and less errors, which are placed on top of the funnel.  Image: Sardmeta1

The horizontal axis of the plot gauges the strength of the results (in this case, positive or negative) while the vertical axis is the precision of the studies. The less precise the studies, the lower on the vertical axis they go. In this analysis, the higher-quality studies cluster near the top and close to the center line, indicating that most of the interventions included had little or no effect. There are some scattered along the positive side of the funnel plot, but they rank lower the cluster. In other words, lower-quality studies tend to favor positive results.

Dupuy et al. also described several limitations about their systematic review that readers should consider, as typical with research interpretation. These include mixed study designs that make measuring the data and drawing the conclusion difficult, and single-blinded studies that can increase the risk of bias among the researchers, subjects, and peer reviewers. Since the therapist who is giving the treatment cannot be blinded, manual therapy research is nearly impossible to be double-blinded. Ultimately, the placebo effect is likely a contributor to most of the studies’ outcomes.

It is also likely that the natural course of muscle soreness is similar to chronic pain. Dr. Martin Englund from Lund University recently wrote in Annals of the Rheumatic Diseases that the placebo effect and contextual effects “may contribute to the total treatment effect.” (5) But researchers, clinicians, and journalists tend to omit or forget these factors and rave about the positive effects only because of the treatment.

One earlier systematic reviews from China reported that massage therapy “could be effective for alleviating DOMS, as well as increasing muscle performance after strenuous exercise.” (4) However, all of the 11 studies in the meta-analysis were low in quality, the researchers reported, for similar reasons as the French study.

Another study from Portugal concluded quite differently. While the researchers found massage therapy also had positive effects for DOMS, “its mean effect is too small to be considered clinically relevant.” (2)

Should you get a massage for muscle soreness anyway?

While the current literature neither favors nor discredits massage therapy as a way to alleviate DOMS, it would be up you to decide. This would depend on your expectations (e.g. “Yes, massage can help reduce the soreness!”) and prior experience (e.g. “I don’t think it would help because my previous massage was painful.”) If you find it beneficial, book a session. If not, find something else that works for you.

Since muscle soreness is akin to some types of musculoskeletal pain, like acute back pain, massage therapy may reduce the symptoms temporarily, allowing some people to sleep better, have more confidence in moving, and other outcomes that enhance the effects of massage.

Remember that contextual and environmental effects, such as the relationship between the client/patient and the therapist, ambiance of the treatment room, and the words and language used by the therapist can influence the treatment outcome. (6) These factors do not undermine massage therapy itself. Therapists must consider other factors that influence clients’ or patients’ experience when they communicate with them.

Muscle soreness is one of last frontiers in human physiology that exercise science has yet to explore thoroughly. Just like how researchers used to think that joint popping is caused by the collapse of joint popping a “bubble” within the synovial fluids of the joint, perhaps emerging research in the future would reveal whether such mechanism is true or not. Meanwhile, we may have to wait for quite a while since DOMS—a common experience among many who exercise—seems to be quite low in research priority in exercise science.

“What you make of the conclusions will depend on your perspective and expectations.” ~ Alex Hutchinson

What Is a Deep Tissue Massage? A Modern Narrative